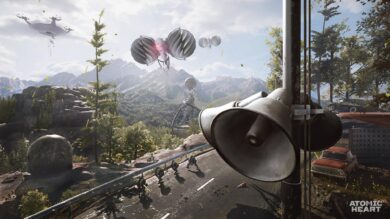 Atomic Heart is a highly anticipated title, set to release in Q1 of 2023. The first trailer of the game showed potential and gave an excellent impression. However, Atomic Heart might be having a tough time, as difficulties are reported at Mundfish. The game appears to be going through a troubling development cycle due to several factors.

As initially reported by Andrey Apanasik, some obstacles exist in the development of Atomic Heart. We have summarized the key points that matter in the report.

The report states that the trailers showcased features that would make the game look more impressive. Mundfish developers were forced to implement these features in the game, which caused issues down the line. Problems like conflicting game design and pointless mechanics were a few of the challenges that resulted from this decision.

That’s basically what’s happening behind the development scenes of Atomic Heart. If you think about it, it’s kind of bad for the franchise in general. The development team had to work even during the New Year holidays. Crunching became more frequent, mainly because of the investors.

Robert Bagratuni – the CEO of Mundfish, says that there is still a lot of work to be done before the release of Atomic Heart. However, he’s offering massive bonuses to the development team to ensure a successful release of the game. The bonuses will be awarded after the release. But according to the source, not many developers paid attention to the bonuses. To them, their health was more important than money.

Gameplay trailers can sometimes showcase the polished areas of the game while putting a blanket over the rough side. It seems to be the case with Atomic Heart, as reported by Audrey Apanasik. While pressure harms the developers’ mental health, offering “huge bonuses” to lure them is not a move that can be respected.

Atomic Heart is set to release on February 21, 2023. Considering this report, we expect a buggy release with many unpolished areas in the game. However, the title is still a few months away, and things can always change in the months before release.

Also Read: Bayonetta 3 Was Initially Pitched As A Semi-Open-World Game